You now know a good bit about how to work with CSS. We've discussed how to select and apply styles to HTML elements, how to style content, work with the box model, and, finally, how to build some basic layouts with all these skills in combination with basic float and clear settings.

Now I'd like to outline for you a process you can follow for larger more complex layouts. It begins with layout analysis, where you first inspect your comp in order to plan the approach you'll use with CSS. We'll make identify rows and columns that will translate to specific CSS settings.

With a particular design comp open, follow this process in order to identify tiles and containers:

Watch for the following exceptions as you analyze your comp:

Once you've completed the Layout Analysis you are ready to move into building out the comp, a phase I call Reconstruction.

The rows and columns you identified in Layout Analysis can be built out by applying the following style sets to each corresponding element:

We'll look at a series of common layout patterns in Lesson 12.

With this basic understanding of the CSS you need in order to build rows and columns you must also note that the they don't just invent themselves in your markup. As you work to create the markup your layout demands, start with content markup as we discussed in Lessons 1–3, and 5. Then use the sectioning tags and <div> tags we learned in Lesson 4 to add groups wherever they're needed. If a row or column includes multiple elements, consider using the most semantic grouping element you can in order to create such a group.

Use this process to complete the reconstruction in a methodical, efficient way:

Continue to refine styles overall to ensure all aspects match the desired style.

Most layouts on the web can be created easily with the flex box settings. There are a relatively small number of patterns that can be applied to such situations.

First conduct layout analysis in order to identify rows and columns. Then, consider which of the patterns that follow fits each row the best. Apply the overall settings but customize the particular values as needed.

Layout Pattern A: Row on its own

The simplest pattern to build out is a row of content that contains no actual columns; all elements inside the row stack on top of each other according to default behavior. In such a case DO NOT use display:flex on the row; I'm calling these out to show you many things that can be done without flex box.

A row on its own might simply span all or most of the width of its container:

CSS: only add settings for border and spacing if needed. DO NOT use display:flex; on such a row.

A2: Row with restricted width

A row on its own might also have a restricted width but nothing on either side of it:

CSS: Set the restricted width and spacing as needed. In this case:

A3: Centered row with restricted width

A row on its own with a restricted width might be intended to appear "centered" inside its overall container. Such a setup is simpler: 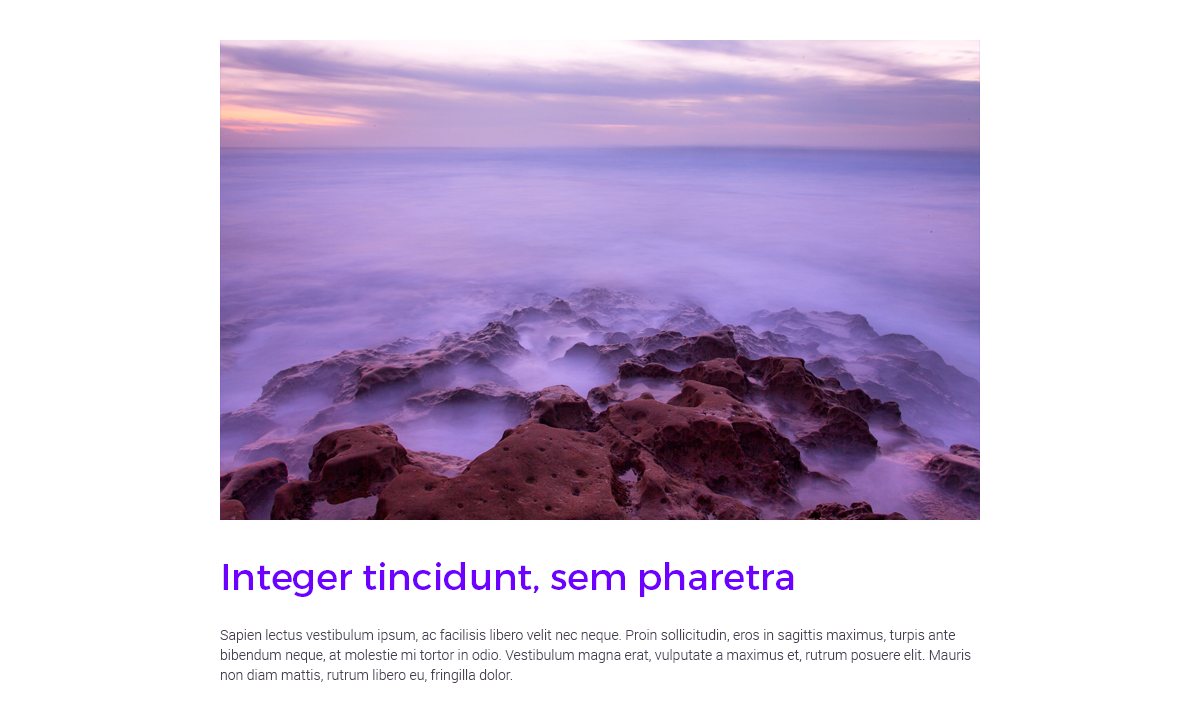 CSS: Simply set the restricted width and then use auto for the left and right margin such as:

You'll often see me use a width plus margin:0 auto to center a layout element.

A4: Row on its own with background image

Another common variation of the row on its own is the "faux column" we discussed earlier. Here there is still only content inside the row stacked one on top of the other, but it feels different because there is also a background image that adds the impression of another column or other content. Whether the content is centered or offset in some way, we'll have to use padding to create the offset. We cannot use auto with padding as we did with margin but must instead use a valid dimension using pixels or percentage. Sometimes a height setting also comes in handy.

CSS: Here we assume width is either 100% or the default width value and just adding padding and a height setting. box-sizing:border-box also often proves useful here. 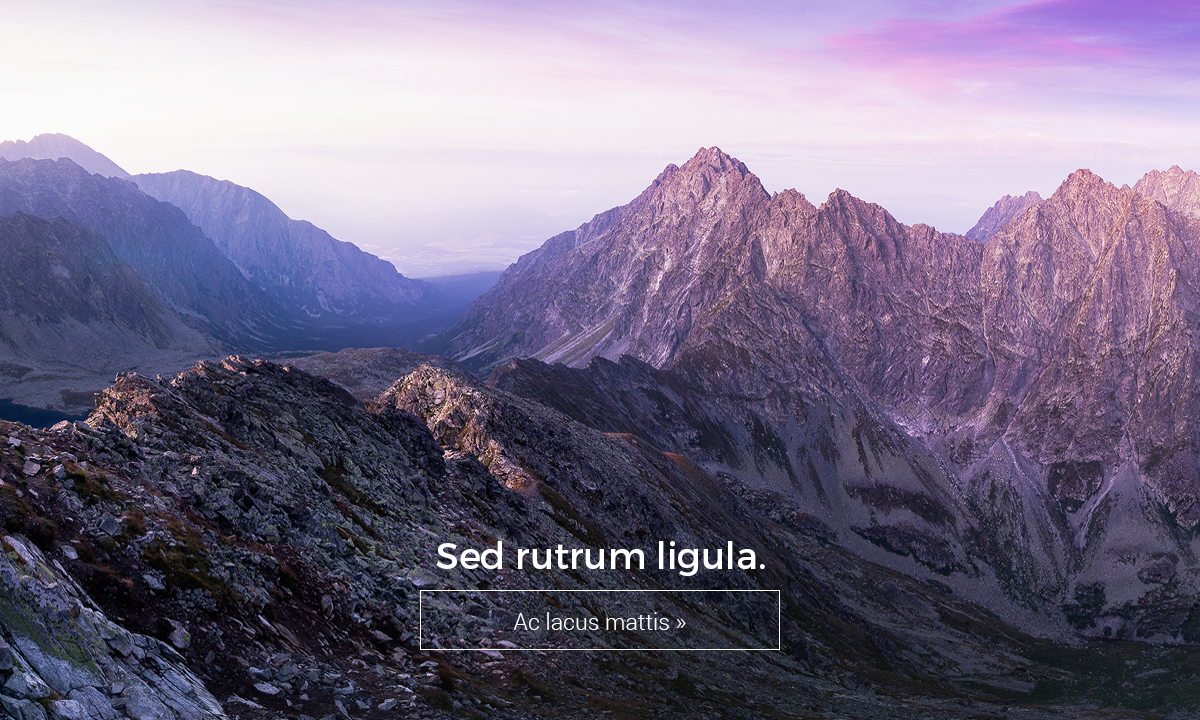 CSS: Here as in the previous example we use padding and height with the background settings to achieve the overall offset. But we've also center-aligned the text for the <h2> and the <a>.

Layout Pattern B: Row with columns

Building off of the basics or working with rows, we next examine patterns that make use of columns in various forms.

When all the columns inside a row are the same size the solution can be very simple, especially if all the items are the same element or have a class in common. Just use a nested selector in order to provide styles for the whole set of elements.

CSS: The flex:1 setting is a flexible way to set them all to the same size but feel free to set a pixel or percentage value instead if you like.

Sometimes you might find that you need to adjust either the first item in the set or the last item in the set (such as to cancel a border or some spacing). Keep in mind that you can set up the overall settings with a broad selector as described above but then provide an override setting using the :first-child or :last-child pseudo-class selectors.

CSS: Here we put a border on the right side of most elements but cancel it on the :last-child. As a result we have reverted to using padding to space the items side-to-side instead of justify-contents on the container.

On the other hand, if the columns inside the row are different sizes, its best to target each individually and set the desired size.

Adding onto B1 and B2, if you need spacing (whitespace) between columns, your solution should depend on whether the columns have a background image or color, or if there’s a border between the columns.

Flexbox makes centering columns very easy. The justify-content:center setting achieves this affect. In this case flex:1 on the items will lead them to all be the same width but fill the whole row. If this is not desired use a width setting on the items instead.

HTML: Here the header ul gets treated like a row as opposed to the whole <header>. We're showing the larger context for your benefit.

CSS: Here we use the very helpful center setting for justify-content to quickly ensure the li elements align on the center axis. Note that instead of flex:1 though we need a width value to ensure the items don't just fill the container. We use auto to just allow the elements to be as wide as their contents demand. We then use margin to enforce even spacing between the items.

B5: Restricted-width row with columns

Building off of the other patterns so far, sometimes you’ll have a row that has a restricted width that also has columns in it. In such a case, you should first set up the restricted width settings on the row using the patterns described above in A1–4, then treat the columns as needed inside of the resulting space as described in B1–3. Also be careful where you apply the .row so that it is on the direct parent element for the columns.

Tiles can be implemented where a set of elements form a predictable series of rows and columns, typically where all items occupy the same width and height, such as in a product thumbnail list.

This is easy to achieve with flex box by setting flex-flow:row wrap on the row. In this case you should be sure to use width settings on the items rather than flex settings.

Note as well that the items inside each of these tiles can be set up using flex box tiling. The three items—image, name, price—have a predictable pattern of size. The image fills the "row" while the name and price sit beside each other. Check out the simple settings to achieve this:

Following the same idea as in B4, tiles inside can easily be centered by placing justify-content:center on the row.

Chances are that the item at the beginning or end of each row will need some overrides applied in order to achieve the desired effect. First apply desired overall tile settings for width, height, margin, and padding.

In order to affect the first item on each row in the tile set you can use this formula for the pseudo-class selector...

To affect the last item in each row in the tile set use this formula for the pseudo-class selector...